This DJMA6 is his own sound tag in his works

he burned in 1992 in Iran, live in Tehran Iran , start piano learning when he was 8 years old from 2005 he starts learning to be a producer and after 2 years he becomes a DJ in 2010 he releases his first track called MUSIC WINGS in 2017 he releases his first music video called INJA ZAMINE that he produced completely, with V-Moda Sponsoring
he has some events in Istanbul at Circus Club and Malaysia at Beach Club and some other countries and clubs,also so many events in Iran … in 2017 he Sponsored by Monster GO DJ At 2016 he starts professional music works in 2017 and he has so many tracks on webspace he starts with his podcast with the name of Tehran Leads on Iran music Persian music market 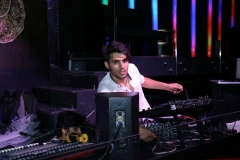 What you know about rolling down in the deep ? --